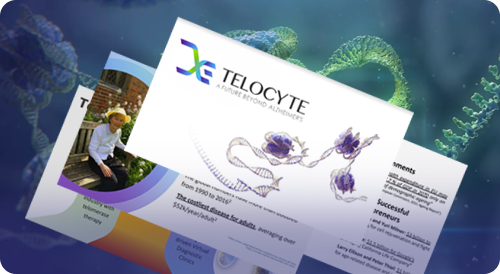 Pharmaceutical companies fail to find a cure because they don't understand the disease. Telocyte's team understands precisely how Alzheimer's disease works and possesses the optimal target to prevent and cure Alzheimer's. Telocyte can move faster, with lower cost, fewer patient trials, and with effective results. 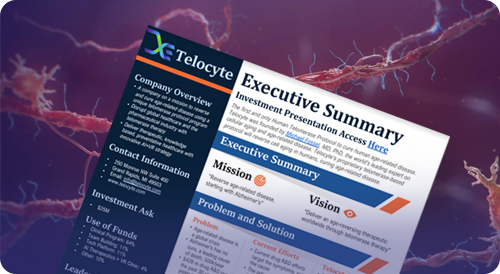 The use of innovative advanced regenerative cell and gene therapies to reset the cell senescence that underlies and defines the "aging process". To be effective, our national healthcare systems need to support the ability to maintain normal cell function as we age, both preventing age-related disease and lowering healthcare costs. Last week, I flew into San Francisco (and took the image above) to chair the Hanson Wade global conference on longevity therapeutics. As I pointed out in my introductory remarks, those attending – both the academic researchers and those from biotechnology companies – are a remarkable group of people, working in a remarkable field, and at a remarkable time. The advances now coming into human trials promise to entirely upend global medicine over the next decade or two. Just as microbial theory did for human medicine over the past two centuries, we stand on the verge of offering effective therapeutics for diseases that, until now, have been regarded as incurable.

That’s the optimistic view but it’s also a realistic appraisal. However, I also offered a few minatory observations about our work, the conference, and the field generally. Consider a few practical caveats that are part of the reality of moving from theory to clinic or – as we might characterize the upcoming advances – in going from chromosomes to nursing homes.

The first issue is that of regulation. While regulatory strictures may be necessary to ensure efficacy and safety, they also incur costs and delays for the field. It’s the nature of the beast. Ironically, a recurring question also comes up when we discuss regulatory bodies, such as the FDA. Put simply the question is whether or not aging is a disease. In a biological sense, it’s an open question and can be defined as a disease or not, the matter being largely subjective. In a practical, behavioral sense, it’s rife with hypocrisy, as many physicians and biologists argue that aging is not a disease, while dying their hair, getting Botox injections, and undergoing joint replacements. So do they think aging is a disease or not? Their words are one thing, but their actions are another. In reality, it doesn’t matter at all, except in one very narrow venue: the FDA and similar global regulatory agencies. The FDA has long maintained that aging is not a disease (in the sense that one can run a human trial to treat aging), but that any application to the FDA must apply for a specific disease, not for aging per se. In many ways, this stance makes sense in that it clarifies the criteria used to define clinical success. You don’t measure “aging” in your trial, you measure the clinical response in patients with dementia or heart disease or osteoarthritis, etc. Moreover, the practical point is that if the FDA makes the definition and sets the requirements, we need to follow them, so we do. Res ipse loquitur.

The second issue is that our technical tools are changing so rapidly that it’s all but impossible to predict the optimal way to deliver an intervention in ten years. Do we use a viral vector (and if so, which vector, which serotype, which plasmid, and for which gene), a lipid nanoparticle, mRNA, dbDNA, or any number of other potential delivery systems. What about lab-designed serotypes, zip-code particles, immunogenicity, side effects, overexpression, cell targeting, and a thousand other concerns? All of this is a matter of how you deliver and is largely independent of what you deliver. The complication are endless, prediction is subjective, and we not only run the risk of choosing poorly, we run the risk of allowing the best to be the enemy of the good. If we wait ten years to choose the best technology, we will have wasted those ten years. Carpe diem.

Financial issues are usually viewed from the standpoint of finding funding, particularly when most investors don’t understand aging, let alone interventions, and tend to invest in yesterday’s models using yesterday’s technology, with perhaps a “new coat of paint”, but actual innovation is rare and rarely understood. But the greater concern for investors is being able to get a potential return: is there a market. Oddly enough, the market is not only enormous – aging is not an orphan disease – but will likely generate enormous revenues while actually lowering the costs of medical care personally, nationally, and globally. Curing Alzheimer’s for a few thousand dollars is a lot better than prolonging the agony in a nursing home for well more than a hundred thousand dollars a year. Medical costs will go down, not up, as diseases are cured and prevented, not endured and lamented.

Conceptual issues also arise. Most gene therapies currently target protein-expressing genes, which are less than 2% of the human genome, rather than the regulatory elements which easily occupy twenty or more times more of the genome. The future of longevity therapy may lie not only in large-molecular gene therapy interventions, but outside “gene” therapy altogether. Epigenetic therapy is likely to be far more important than gene therapy. A far more critical conceptual issue is while most people – even researchers – assume they know what aging is, almost no one does. If you assume aging is merely wear-and-tear (entropy), then it’s almost impossible to intervene effectively. Once you realize that aging is a failure of maintenance mechanisms – and that they can be reset – then intervention becomes a question of how and why, not if.

Perhaps the key issue, however, is not regulatory, technical, financial, or conceptual, but that of credibility. I’ve been involved in aging research for almost 50 years, gave first NIH talk on the area, published the first book and the first medical articles on intervention in aging (in JAMA, the Journal of the American Medical Association), was the founding editor of Rejuvenation Research, wrote the only medical text on the field for Oxford University Press, and Elsevier Publishing has commissioned me for a textbook on aging and the potential to cure and prevent age-related disease. None of that matters. In the long run and with an eye on reality, credibility cannot be judged on articles, textbooks, social media claims, TED talks, or high-quality global scientific conferences. Ultimately and appropriately, credibility will only be judged on our ability to deliver effective interventions that cure age-related disease and extend the healthy human lifespan. Credibility is not measured in TED talks, but in patient lives.

In the meantime, we should keep our feet on the ground, our eyes on the horizon, and see what lies over that horizon when we go to human trials.